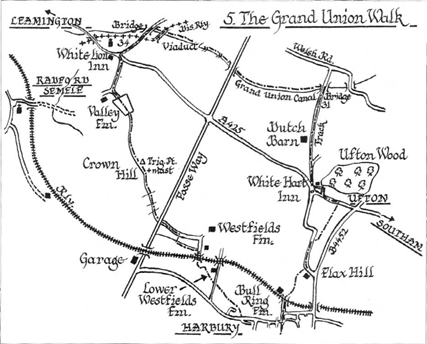 This is the longest walk (not to be under estimated) on the site - a pleasant circular well waymarked route with the option of starting at Harbury, Radford Semele or Ufton. (If you start from Harbury Village Hall take Walk One with you for the final leg)

From the Village Hall, (P) turn left on to South Parade and right on to Chapel Street. At the end of Chapel Street, go left down Mill Street (the Shakespeare Inn is on your left) and gently uphill to Binswood End at the north-western edge of the village. On the right opposite a lay-by, a footpath sign points north-west. Take this path, going behind the Hillside houses into a field. Keeping the hedgerow on your right, follow the field boundary to the far end where the ground starts to slope steeply downwards. (It can be very slippery).

Follow the well-defined path down the steps through the spinney. At the bottom of the spinney, cross the stile into a sloping pasture. Admire the panorama of Lower Westfields Farm ahead and the Great Western Railway on your right emerging from Harbury Cutting and crossing the lowland on an embankment towards Royal Leamington Spa.

Again, keeping the hedge on your right, cross the field to a metalled farm track. Over a stile cross the track and go through a series of paddocks giving access to pasture with pronounced ridge and furrow - part of medieval Harbury's Great West Field. The pasture is sub-divided into small paddocks for horses, but there is a well-defined pathway between fence-rails. Follow the pathway to a stile in the far corner next to the railway embankment. Cross the stile and follow the railway embankment westwards for half a field length to a rail arched bridge on your right, where you go under the railway and follow the grass track towards a house.

Just before the first house and gravel road, turn left and follow the footpath along the field edge, keeping the hedge on your right. After about a quarter of a mile, go through a gap in the hedge and cross the “bridge” over the ditch. Go straight ahead, keeping the hedgerow on your left to join a metalled track. Turn left and follow the track to the Fosse Way. Be careful – the Fosse Way is very busy. Having crossed it, go through a kissing gate in the hedge. Follow the grass track between the fence and a line of conifers. At the end of the line of conifers, go straight ahead, passing a field (containing Llamas) on your right, keeping the hedgerow on your left as you gently climb to the top of Crown Hill. Past a redundant stile the communications mast and "trig" point at 330 feet is a good place to admire the view back over the Fosse Way to the ridge where the villages of Harbury and Ufton can be seen easily. To the west lie Radford Semele and Royal Leamington Spa. The ridge of Edge Hill is to the south and the high cement chimney to the North East at Southam.

Continue to keep the hedge on your left, follow the footpath gently downhill until it eventually arrives at a roughly triangular shaped pasture which is entered through a metal hunting gate. There is a secluded pond to the right with an island where Canada geese have been known to breed. Walk straight through the middle of the field, going past a way marker post on your way. Go through another hunting gate onto a metalled road. You are now entering Radford Semele via the Valley Road.   *Route 10 diverges here.

Turn first right and follow Lewis Road past the Baptist Church and the Post Office to its junction with the A425 Royal Leamington Spa to Southam road. This is pretty much half-way so it might help to know there is a defibrillator on the wall of the one-stop shop. If sustenance is required, turn left here for the White Lion; if more spiritual sustenance is required, then visit St Nicholas Church - part 12th century with much late Victorian restoration by the Francis - Greswold - Williams families.

To continue the walk, from Lewis Road cross the busy A425 with care and go straight ahead, following a narrow footpath between the houses to Offchurch Lane. Turn right to follow the road down to the Grand Union Canal. There is no footpath for the last 400 metres. Having crossed the canal on bridge 34, turn right to leave the road opposite Bury Lodge and follow the towpath past Radford Bottom Lock and under the rather imposing viaduct that used to carry the Leamington to Rugby railway line.

Follow the towpath for about 2 miles, going under the Fosse Way, to Langhole Bridge (bridge number 31). Leave the towpath on the far side and go over the canal bridge to follow the green lane south to Ufton. Beware- the first few hundred yards is badly rutted from use by 4-wheel drive enthusiasts. (at the time of updating much of the track has been converted into an access road for HS2 works.)  However, the surface soon improves and the views open out with Ufton Church prominent at the top of the hill ahead. Ascend the hill to Ufton, the track becomes metalled where it becomes steeper and depending upon your needs you pass the White Hart, the Stocks and the Church of St Michael.

Avoid the main road by turning left at the "No Entry" sign and up the steep road past the White Hart, the stocks and the back of the Church to cross the main Southam road. Take great care.

Turn right and follow the main road in the direction of Southam. Be careful - the road is busy, but fortunately this stretch of the walk is short! Just beyond the Village Hall, a waymarked lane on the right is the start of the return route. Don't be put off if the lane looks like a private drive. Beyond the house that fronts the lane you come to Ufton allotments. Keeping the allotments on your left and the hedge on your right, go over a stile into an arable field. A kissing gate brings you into the Ufton Fields Nature Reserve, important for its rare orchids.

There is open access to the Reserve, and the left hand (permissive) path is a pleasant diversion around it. However, our way follows the footpath to the right around the edge of the Reserve, where care needs to be taken, for the path runs along the top of a fairly steep ravine which is not completely fenced.

Follow the path almost as far as a metal gate that leads out on to the road. Do not go through the gate, but turn left instead and follow the permissive path that runs parallel to the road and into the Reserve car park. Leave the car park and turn left into Ufton Fields road. Shortly after the road bends sharp left, take the footpath on the right, signposted near the entrance to Flax Hill (a large white house). Follow it, keeping the hedge on your left and go through another gate.

From here to Three Arch Bridge, take care not to disturb any horses or cattle! Where the hedge bends slightly left, bear slightly right to a kissing gate in the hedge ahead. The Three-Arched Bridge comes into view once more - admire the bridge's complex brick curves of this bridge which was built to give access to the farm and allotment land when the Great Western Railway sliced through in 1852.

Follow the path to another stile. Having crossed this next stile, turn sharp right and, following the post and rail fence, cross through two more metal gates to join the road at Three Arch Bridge.

From here turn left to cross the bridge. Go straight up the hill, passing the brick wall on your left that forms the boundary to Harbury Hall. Go straight ahead, returning directly to the Village Hall via the Bull Ring and Ivy Lane.