Walk 2 The Old Village Walk, 5 pubs and a church.

The walk starts at the Village Hall (P). Turn left and follow South Parade into Park Lane.  With Chapel Street on your right the village cemetery is on the left which is a peaceful graveyard containing some 19th century grave-stones and mature trees.  Walking on along Park Lane, the back of the village school is on the right, and then further down you pass one of the premier sights any village might have to offer, the Elizabethan Manor.  This was the reason that the Harbury Society was established: to prevent its threatened demolition.

Having had a good look at this house from the gateway, (so worthwhile preserving), walk on and take the next right into Farm Street.  The first pub is on the corner opposite (the Old New inn) sadly closed in 2017. Its future is as housing. Walk up Farm Street which has a number of the village’s original houses built in Harbury stone.  Hill cottage is a lovely example at the far end on the left.  It has its own well.

Turn right into Mill Street. This is lined with mainly “modern” houses. The village garage (a quaint legacy) and the current doctor’s surgery are on your left. Just beyond this take the footpath off to the left alongside Trice’s farm. This farm at the centre of our village has retained a herd of pedigree dairy cows and provides immediate rural charms on the edge of our village.

At the end of this footpath climb over a stile and turn right along the path which runs parallel to the village. Cross two stiles.  This is where the path crosses the route that the cows take for milking and can be mucky underfoot.  Then after a short distance another stile is crossed to enter a paddocked area.  Turn right and follow the footpath up the side of one of these.  At the top, as you pass the first house on your right, look left to see the collection of army vehicles parked in the stables. 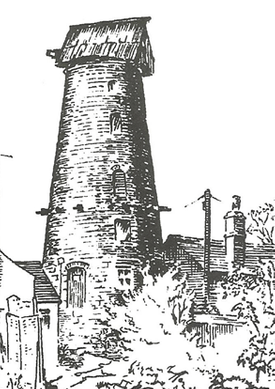 Walking on you pass another great feature: the old village windmill, now converted into a residence. Beyond is the High Street and you are amongst the shops at the centre of the village. The Shakespeare pub is down on your right and the Gamecock ahead of you.  Keeping left you walk passed the library and coffee shop maintained by local volunteers and housed in the original village school building. Then walk ahead into the Bull Ring where the village market must have been originally sited. Note the “bull” motif on the wall with the date 1577 above the door on the corner cottage. The Dog Inn building is in front of you; now converted to a children’s nursery.

Keep left and walk along Church Terrace and swing right past along the wall of Harbury Hall to your left.  The church and allotments are on your right.  Also on your right is the village club. At the end the old village Pound is ahead with magnificent trees. Turn right here into Crown Street and come to the Crown Inn on the right. This is a very attractive pub. No shortage of refreshments in these parts.

Then pass the pump and war memorial then turn right into Church Street.  Here the church yard and 12th century (altered in modern times) All Saints church is well worth a visit. When ready, continue back into the Bull Ring and turn immediately left into Ivy Lane.  On the right hand side there a row of really pretty terraced houses.

Having reached the end of Ivy Lane you are back to the start with the village hall and playing fields facing you across the road.